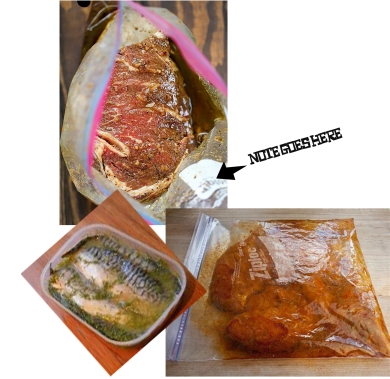 Marination sounds like something you’d see on a  t-shirt for a Marine Corps sports team,  or some slightly odd marriage counseling service.      ” Come see us at MariNation for all of your relationship repair work. ”        Then again maybe it’s the official name for the process of soaking foods in a flavored solution before cooking.  You can choose your definition, but for right now I’m going with the one about soaking and flavorizing.
Sort like the weather, marinades can be either wet or dry. Only with these you get a choice.  A wet marinade might include water, oil, wine, beer, or liquor as a base with an acid such as citrus or vinegar added along with salt, pepper and an endless variety of spices. The acid in a wet marinade causes the connective tissues of meat to break down. That, in turn, allows the meat to absorb moisture and whatever flavors are in the marinade. Clever, right?  Don’t you feel smarter already? Wet or dry, the purpose of marinating is to tenderize tougher cuts of meat and impart both flavor and moisture to the food that will achieve its’ magic through the cooking process.
A dry marinade uses the dry spices but without a liquid base. Hence the name, right? Wait! What? No rum?? Since it’s the acids dissolved in the wet marinades that tenderize meat, a dry marinade won’t help at all with tenderizing. Pay-back for the “no rum” thing, I’m thinking.  In their praise, dry marinades do seal in juices, sometimes add a crunchy texture, and make possible wondrous flavors. The choice usually comes down to the cut of meat and flavor you’re chasing. What most people think of as Asian or Polynesian flavors often contain soy sauce, ginger, and rum (of course). Those are best applied as a wet marinade so they permeate the meat and blend with the meats’ own taste. A more spice oriented flavor might blend paprika, garlic, and peppers. Those tastes are best used in a dry marinade or “rub”. They form a top layer of flavor but highlight the actual meat taste overall.
There is a time factor with wet marinades. Even if the big boys tell you to marinate something overnight, leaving it in the solution too long will break down the meat to the point of it closely resembling a science experiment gone tragically wrong. Marinades can also include acids like pineapple, ginger or papaya. These guys contain enzymes that help break down muscle fiber and collagen, helping to tenderize meat but sort of like Uncle Frank’s truly bad jokes they don’t know when to stop. Removing meats from the marinade starts the stopping but cooking turns off the tenderizing process.  It’s also best to not start with frozen meat because the marinade’s acid can turn frozen meat into less-than-stellar mush ( also see science reference above). Less than 30 minutes if pretty much useless, but creating marinated mush is to be avoidedat all costs. The answer , like my Mother used to say, lies in moderation. My thumb has a rule that 3-6 hours works for all but the toughest cuts of meat. Lean more towards the 3 than the 6. If you’re preparing seafood cut the marinade time to 2 hours.

Now comes the part about bacteria and stuff. Unless your intention is to make your guests sick you are going to want to follow some easy guidelines.Try to use glass bowls or plastic bags when you marinade. Other materials can have chemical reactions with the acids that can contaminate your marinade and the food in it.

Meat, chicken, and seafood all contain bacteria that can make you sick. So follow the common sense rules about washing. Speaking of contaminated, if you’re using a wet marinade be sure to toss the remaining liquid after you remove the meat.  It is Pau Hana (done with it’s job) . If you’re using a dry marinade or rub just pick something else to toss so that you feel like you’re still in the game.

Utterly delicious rum marinade
I have notes I’ve left myself and still forgotten what they were about, notes in singing I’ll never reach and shouldn’t try, and maybe even notes from Kelly Anne in 8th grade. She was so cute and had great handwriting. Good dark rum will have notes of caramel, and a hint of citrus. These days I prefer rums’ notes. Sorry Kelly Anne.
I have a note here that says this marinade works great on almost any meat. Re-read the part above that talks about how long you let things swim in the solution. For a really tough flank steak you might chance an overnite soak, but most things will be best if you remove them at around 3 hours.
Here’s the ingredients:

Here’s how to do it

Remember what we said about using proper containers in which to marinade?Here’s your chance to put that education to work. Combine ingredients in a large ziplock bag and add your meat-of-choice. Make note of the time so you won’t forget. When it’s done remove the meat, let it drain a bit before grilling or broiling.  Enjoy !

If you ever see Kelly Anne tell her I’m always thinking of her.